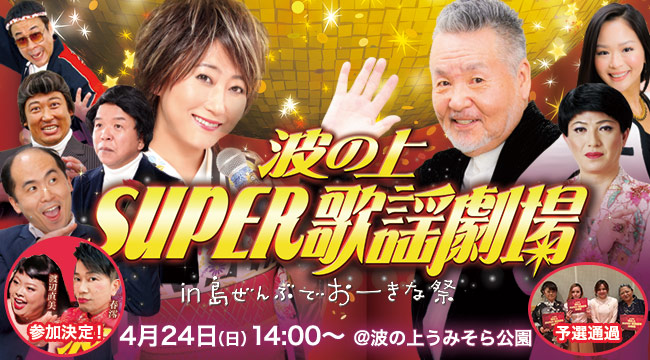 Chieko Mizutani, celebrating 50 years in entertainment, and Taiji Nakamura, a giant in the pop music business, are the hosts of the "On the waves SUPER Kayo Theater" event that will be held during the Shima Zenbu de O-kina Matsuri!
It's a jamboree of delightful members ready to show off their singing voice! Win the preliminaries that will be held on March 27, and you can perform on stage, too!

The event can be viewed free of charge! 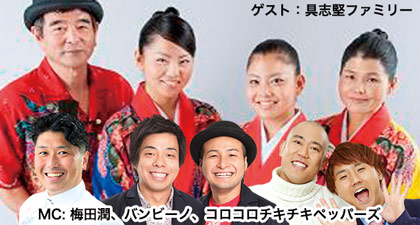 Chieko Mizutani has now been in show business for 50 years. Her career began in her childhood, as an unexpected participant in the "Uta-mane Ki-ippon (Pure Song Impersonator)" show. She became the grand champion. Noticed by Shojin Futaba, who was also the show's judging committee chairman, Mizutani entered the world of show business.
In her youth, she was also known as the "Lark of the Hokuriku" for her awesome singing ability, and became a formidable presence in various singing contests.
Her debut single, "Banpaku Sasanishiki" became an instant hit, and her later works such as "Scotch ga osuki desho" and "Mizu-chie Rumba" won her numerous music awards.
Every year, she has continuously turned down offers to appear on the "NHK Kouhaku Utagassen (NHK year-end grand song festival)". In recent years, she has become a bridge-like presence, bringing Enka and J-POP genres together, and spreading her range of work.
In January this year, the great success of "Chieko Mizutani Keep on Shining Kayo Festival" event held at NHK Hall became the talk of the town. Her compilation album "Chieko Mizutani Best Album BAKAITTERU" is currently on sale!

Songwriter and composer, Taiji Nakamura was born on May 21, 1939, in Nara Prefecture.
Nakamura's numerous accolades include the 14th Japan Record Award in 1972 for "Kassai" sung by Naomi Chiaki, and the 25th Japan Record Award in 1982 for "Kitasakaba" sung by Takashi Hosokawa. Twice receiving the distinguished award, Nakamura is renowned as a hit-maker.
In addition to his songwriting and composing, Nakamura's recent activities include the musical productions of "Dotonbori SUPER Kayo Theater", productions of "Osaka Kayo Joshi-dan" and Kayo Joshi's "Jukuzen Kajitsu", showcasing his enthusiastic endeavor to restore the glory of Showa Era pop music.