Okinawa International Movie Festival has played a role as a touchstone the community since its inception 8 years ago. It brings people together and examines important social issues of interest to everyone. Thus the screening of Cocktail Party is perfect for OIMF. It addresses one of the most disturbing and difficult issues facing Okinawa today, sexual assault by US military personnel. Realistic and nuanced, the film stays away from black and white, good vs. evil characterizations. Instead it shows how a crime like this can develop without any of the principles being psychopaths or hateful people.

Known for his award-winning documentary work in Japan, Cocktail Party is Regge Life’s first narrative feature. It’s based on an Akutagawa Prize winning novella by renowned writer Tatsuhiro Oshiro. Life sets up the scenario where petty officer Lance Wilson (Andrew Spatafora) has returned from a night on the town where he disappeared for a while with Naomi (Saori Goda), a 19 year-old woman he met in a bar. Allegations of rape soon surface and in addition to the woman’s trauma US military-Okinawan social and business relationships are threatened. Rather than simply making the film about a crime, Life depicts the complicated and interwoven social fabric of the island, and the repercussions for someone who raises allegations of rape.

Cocktail Party created an intense and palpable atmosphere in the Cinema Palette theater in Kumoji, downtown Naha. Cleary this was more than a simple film screening, relating to people’s lives as perhaps no other English-language film has. Audience members shouted at the screen, gasped and sighed, and more than a few shed tears at this story which captured a tragic reality in Okinawa. This film, made by an American director in both Japanese and English, allows Okinawan residents to see themselves as part of a global community, one which does not accept this kind of crime perpetrated on Okinawan people.

Director Regge Life sat down with the fest to discuss his timely film and source material. “This book was book that was talking about what I wanted to talk about, the grey area. That area in every culture where the home culture and the visitor culture meet, and people survive, and get along, and make deals.” He adds, “I wanted my film to be about that side of Okinawa, not pro-base or anti-base, or any of these long-standing issues that have their own dogma.” The film is based around, and depicts, a rape, which Life portrays with sensitivity. He did a tremendous amount a research with people involved in sexual assault in Okinawa. “Using all that information I had I wanted to shape these two individuals, but at the same time I didn’t want them to be simple, to be caricatures of the good guy and the bad guy.” 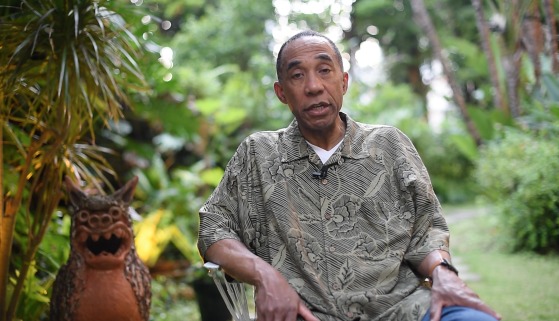