The 8th Okinawa International Movie Festival concluded on Sunday April 24th by screening more charming films, including the Thai work May Who and the Japanese drama A.I. Love, as well as holding a second massively attended Red Carpet event, the Closing Ceremony and the All Ending musical event.

Sunscreen and water were essentials at noon on Sunday as thousands gathered on Kokusai dori, the one-mile main street of Naha City, for the second OIMF8 Red Carpet.

Being such a strong community event, friends and family of many local participants also showed their support. Locals created and joined a range of comedy, sports and arts events, and now they faced the media on the walk to the big screen and stage at the end of the Red Carpet at Tenbusu Naha.

Amongst the guests were comedian Naomi Watanabe, who before the festival was named the ANA Okinawa Poster Girl. She was followed by a host of cute characters, including an appearance by the world famous Pikachu, as well as members of hugely successful pop group NMB48. Celebrities continued to walk the Red Carpet for more than an hour.

The Closing Ceremony saw politicians from around Okinawa, as well as Tokyo, take to the stage to celebrate the success of the festival – almost all smiling and commenting on the wonderful weather this year, thanks to the new April dates. With the Creator’s Factory Awards given out at the end of the ceremony to new scriptwriters and directors, there was also a sense of the future at the ceremony. OIMF 9 was also confirmed.

Hiroshi Osaki, Chairman and CEO of Yoshimoto Kogyo and President of the Okinawa Film Festival concluded the ceremony with a speech.

The 8th Okinawa International Movie Festival formally finished with a musical extravaganza on the main stage in Naminoue Umisora Park in Naha called the “All Ending.” Emceed by comedian duo Garage Sale and Slim Club, the Sunday evening event kicked off with local pop group Kariyushi 58.

Known for blending traditional Okinawan folk music with rock, the group led a special collaboration called “The All the Islands Okinawa Band,” with musicians joining on stage from various groups.

Two songs in, the first rain of the festival suddenly began falling causing a temporary halt to proceedings – fitting then that next on stage was Jimama, who performed “Daijoubu” (“It’s going to be alright”).

The All Ending event concluded with a yearly message from comedian Sanma Akashiya by video, followed by a spectacular display of fireworks over the bay, concluding another packed Okinawa International Movie Festival.

In all, 350,000 people attended the films and events of the 8th Okinawa International Movie Festival, 75 films were screened, 80,000 attended the two red carpet events, and 8.8 million yen ($7930) in prize money was awarded. The event was a success on every level and the organizers vowed an equally powerful 9th Okinawa International Movie Festival in 2017. 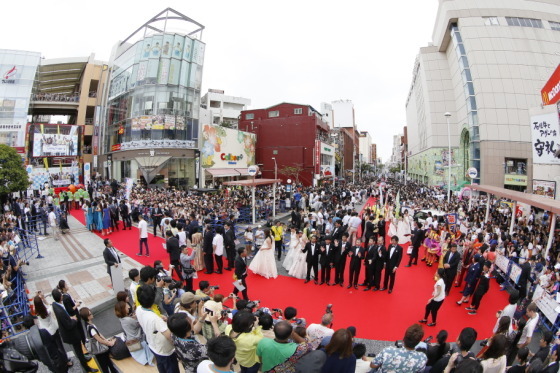