On Saturday April 23rd the “Chura-ii" Girls Up! Stage” was held on the Okinawa Rycom Special Stage at the Aeon Mall in Kita Nakagusuku village.

This attractive presentation combines a fashion show by popular brands, as well as music and comedy performances. The fashion show is produced in collaboration with Yoshimoto entertainers and features currently popular Japanese supermodels. It’s aimed at promoting the Japanese sensibility of “Chura-ii” (which means ‘beautiful’ in the Okinawa dialect) in the fashion world. It was held at the Aeon Mall Okinawa Rycom this time, so models and comedians strutted on the runway wearing clothes from the shops in the mall. They also introduced local Okinawan brands. It’s a popular event, which wows the girls every time.

The Waseda University cheerleading squad the Shockers took the stage as the opening act. The audience enjoyed watching the dynamic performance with continuous aerial assaults by the male group.

Single Tanaka of 86BAZOOKAAAAAA manned the wheels of steel in the DJ booth and female models catwalked on the stage to pounding club music. The procession started with Cecil Kishimoto and Tina Tamashiro from Okinawa prefecture. Popular supermodels such as Kumiko Funayama and Nonoka Ono showed their faces as well, and the female audience appreciated their beauty and gasped, “they’re so cute!” In addition to the beautiful models, famous comedians such as Trendy Angel and Natsuko Yokosawa also strutted on the runway.

The Okinawa Designer’s Stage followed and models wearing “Lequio” and “Yokang”, fashion brands inspired from nature and traditional Okinawan designs, took the stage. Cecil Kishimoto appeared with an emerald green dress and said, “the color reminds me of the ocean in Okinawa.” Tina Tamashiro and Nonoka Ono appeared in Ryukyu wedding dresses. The beautiful design which used hibiscus offered the unique atmosphere of Okinawa. Loud applause thundered from the audience.

On the music stage, Natsume Mito sang pop tunes and the audience enjoyed her charming smile and voice. Iris from Malaysia, who has a powerful voice, passionately performed her debut track “I love me / good bye.” Also, Korean idol group MR.MR, meaning “men of men”, pounded out their energetic routine, singing and dancing expertly.

Then Naomi Watanabe took the stage, showcasing her own fashion brand “Punyus.” The audience went wild as she took the stage. NMB48 appeared at the end and showcased the brand “WEGO.” They played one of their hits as well as a new release, appearing in stores this month. The audience really appreciated the presentation by the hugely popular group and cheered wildly.

Eventually all the models, comedians and musicians again mounted the stage. The performers summed up the night saying, “Okinawa is great!” and “See you again next year,” waving to the audience. 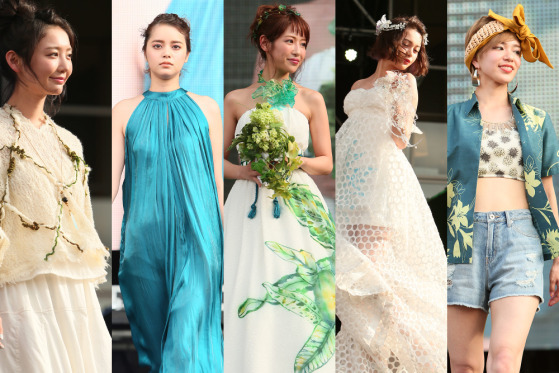