Sunscreen and water were essentials at noon on Sunday April 24, as thousands gathered on Kokusai Dori, the one-mile main street of Naha City, for the second OIMF8 Red Carpet.

Being such a strong community event, friends and family of many local participants were also showing their support. Locals had created and joined a range of comedy, sports and arts events, and now they faced the media on the walk to the big screen and stage at Tenbusu Naha.

Amongst the guests were comedian Naomi Watanabe, who before the festival was named the ANA Okinawa Poster Girl. She was followed by a host of cute characters, including an appearance by the world famous Pikachu, as well as members of pop group NMB48.

One of the festival’s highlights was “Macbeth,” the first foreign movie to be distributed by organizers Yoshimoto Kogyo in Japan. Representing the movie were Tomochika as Lady Macbeth, and comedian Buffalo Goro A as the warrior Macbeth. The duo were joined by William Ireton.

Broadway’s Hinton Battle was dapper and energetic as he walked the red carpet past Heiwadori, along with dancer Kevin Glasford. But even his outfit couldn’t compare to that of comedian and flip book creator Tekken, who’s “The Brighter Society Campaign” has collaborated with the Ministry of Justice to reform criminals.

International guests then caught the eyes of the cameramen in the media scrum, with director Regge Life suited up to promote his film “Cocktail Party,” based on the Akutagawa Prize-winning book by Okinawan writer Tatsuhiro Oshiro. Sri Lankan director Boodee Keerthisena, who directed “Alone in a Valley,” followed on the Red Carpet.

Looking to the future, with Yoshimoto’s “brother” festival in Kyoto to come in October, Director Sadao Nakajima was one of the last guests to make the walk, as the crowd to filter away with smiles on their faces and stories to tell their friends and family. 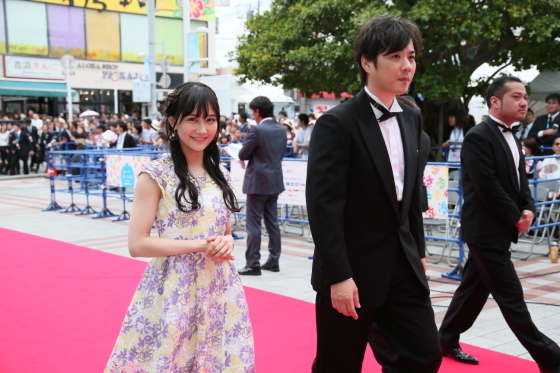