Event Report2016.04.22Rookie Chef is Less about Cooking, More about Family

Rookie Chef is helmed by acclaimed director Fung Kai, whose 2012 hit Din Tao: Leader of the Parade is one of the highest grossing Taiwanese films of all time. Rookie Chef is a heart-warming tale celebrating family, tradition, togetherness and child-parent bonds. The story starts with the Chiang family, who has an illustrious history as one of their distant ancestors was a brilliant chef who cooked for the emperor.

He was so good he wrote a recipe book but it has been lost for centuries. Chi-ming (Wang Po-chieh) is on the run with his beautiful 5 year-old daughter Lele, as he’s lost a custody battle to his father-in-law. He runs into the Chiang clan, led by grandma and the assertive Chi Bao (Lorene Ren), and accidentally discovers the original hidden, ancient recipe book.

What follows is a battle for Chi-ming to become a good man and get his daughter back while bonding with the down-home Chiangs and celebrating great cooking.

“We took three hours for one scene which only played 12 seconds” joked Lorene Ren of the challenges of filming the cooking scenes, who explained that the main theme is the love of the family. “I come from a very loving family, so I love that kind of family life and I hope that the audience can feel the same way.”

“Originally I wanted to use special shooting technique to make the cooking more attractive,” said director Fun Kai. “But we spent a lot on CG in first historical part, and I wanted to focus on the relationship, so we filmed it more simple.” 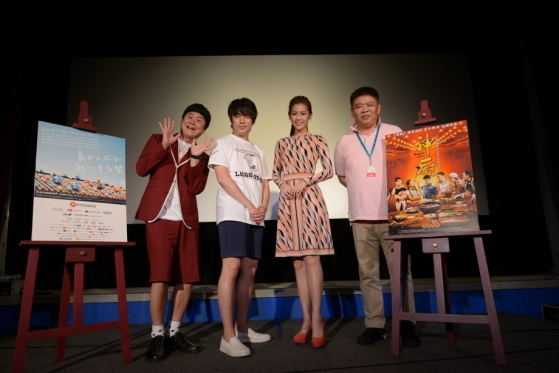