Beginning with the 5th Okinawa International Movie Festival, the 4th year of this project has set up the "Creator's Factory U-25 Movie Category" to find and support the development of the next generation of movie makers under 25 years of age, and a "Movie Proposal (Screenplay) Category" for movie plans that haven't gone forward due to lack of funds, people that have never produced a movie before but have a proposal that they would like to see realized, or people that would like to give movie directing a try. For both Categories, any genre is acceptable, including comedy, documentary or animation. Regardless of whether the work itself is rough, we are looking for public submissions on a wide range of film proposals for surprising pieces that show a new perspective that only the creator themselves can achieve, as we look to find and train the next generation of talented creators. Under the "Creator's Factory U-25 Movie Category", work selected for the Best Creator's Factory Award will have the production of their next film supported by the Okinawa International Movie Festival.
Also, under the "Creator's Factory 2016 Movie Proposal (Screenplay) Category", work selected for the Best Creator's Factory Award will have their next screenplay produced and support provided for their proposal.

Previous successes include Kiki Sugino, who won both the Grand Prix and Best Actress Awards for her film "Odayakana Nichijo" in 2013, and went on to produce the R-18 Literary prize vol. 3 "Manga Niku to Boku Kyoto Elegy", set in Kyoto and starring young actor Takahiro Miura. In 2014, Koji Fukada won the Grand Prix with the Local Origination Movie "Inabe", a film set in Inabe, Mie Prefecture and starring comedian Masahiro Matsuda of 'Hiking Walking', and then went on to receive support for his film "Sayonara". This year also, a work and proposal will be selected after a careful examination by our jury, who are active in various fields in the industry. 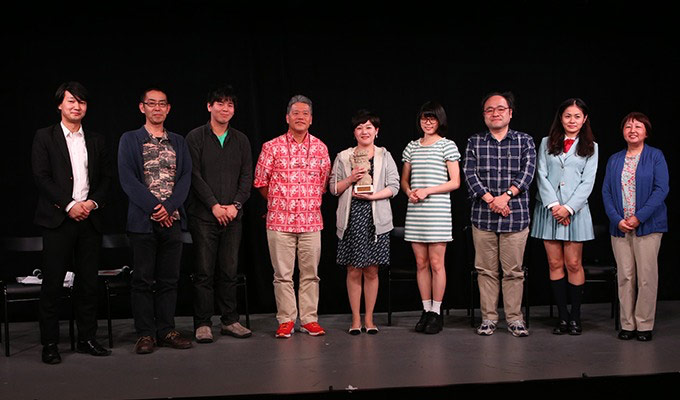