A groundbreaking work of Japanese entertainment was presented by OIMF at the Sakurazaka theatre in Naha on the first day of the festival. OIMF premiered 3 episodes of Netflix Japan’s original and groundbreaking TV series HIBANA- Spark. This will be the first time for a Japanese TV drama to be broadcast in 190 countries around the world at the same time, showing the great strides Japanese visual entertainment has made.

And the content is remarkable. Based on a novel of the same, which won the prestigious Akutagawa Prize (Japan’s highest literary award), it broke records by selling 2.51 million copies. With the much-heralded book as an auspicious base, Netflix has created an original 10-part live-action drama series starring wildly popular actors Kento Hayashi and Kazuki Namioka, among others. It was also able to lure A-list Japanese directors like Ryuichi Hiroki, Shuichi Okita and Kazuya Shiraishi, among others, allowing the project to be superbly produced. The internationally recognized auteur Hiroki directed episodes 1, 9 and 10.

The series follows aspiring manzai (Japanese standup) comic Tokunaga (Kento Hayashi), who has been struggling to make it in the world of comedy. On an evening trip to spa town Atami, near Tokyo, for a fireworks festival he meets the experienced comic Kamiya (Kazuki Namioka). The crazy and cutting edge Kamiya agrees to tutor the younger comic if Tokunaga will write a biography of him. The series follows the pair touching and unique relationship as Tokunaga’s star starts to shine.

The audience cheered heartily the screening of episodes 1 through 3 and was thrilled by post-screening appearances by Hayashi, Namioka and Hiroki, among other special guests, who shared ideas, feeling and anecdotes about the making of the series.

Kento Hayashi shared his thoughts on the sizzling hot property of the source material. “Last year the novel was huge news and I watched the author’s press conference on TV! I was thinking that the novel will be turned into a movie soon but I didn’t expect that I’d get to play in the visual presentation of the material.” He added, “I emphasized I can speak Osaka dialect to get the role, and I’m very happy to get the gig. It’s a very rare opportunity to take part in making such a well known into a TV series or movie, so I am glad to be part of this project.”

Director Ryuichi Hiroki gave some insight into how he approached the material as well. “For me it was very important to describe the real life of comedians and maintain the atmosphere of the original novel. I found it interesting that the director of each of the episodes chose to emphasize different comedic parts of the work. Everyone took great care to preserve the reality of the story.” 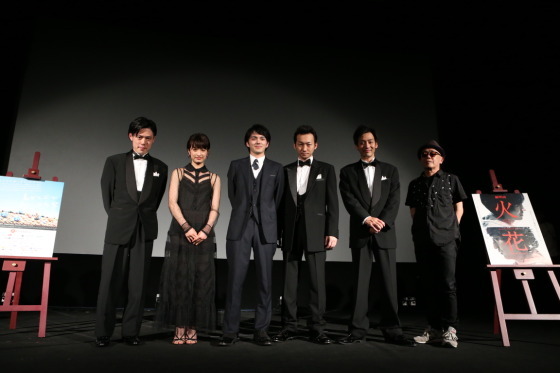