Political and media leaders and commentators joined forces and shared ideas Saturday April 23 at a Special Symposium to discuss “The Future of Okinawa and the Role of Entertainment” held at ANA Crowne Plaza Harborview in Naha, Okinawa.

Organized in conjunction with the 8th Okinawa International Movie Festival, the symposium began with a greeting from Aiko Shimajiri, Minister of State for Special Missions. Ms. Shimajiri expressed her hope that Okinawa’s fascinating and beautiful nature, island culture, unique cuisine and traditions of arts including eisa dancing will be promoted within the Cool Japan initiative. “I wish that the power from the Okinawa Movie Festival will be transmitted throughout Japan,” she said.

Hiroto Izumi, Special Advisor to the Prime Minister, then gave the Keynote Speech on “Growth Strategy by the Abe Cabinat and Okinawa, Cool Japan.” Mr. Izumi revealed that the government is well ahead of its target to attract 20 million tourists per year to japan by the Olympic year of 2020. “Last we have 19.74 millions visitors and we are now targeting 40 million tourists by 2020 and 60 million by 2030,” he said, pointed to the government’s easing of VISA requirements as a major cause of the increase.

Okinawa is only one of three locations in Japan to have national theaters, along with Osaka and Tokyo, Mr. Izumi said. For cruise ships Naha is the number one destination, with 105 port calls out of 221 total in Japan in 2015, with the southern island of Ishigaki second.

The Special Advisor also revealed the government’s aim to build a Japan Heritage network as a local version of UNESCO World Heritage sites. “We want to create Japan Heritage to revitalize towns, and we hope that can designate more assets in Okinawa so that we can promote and revitalize Okinawa prefecture too.”

Mr Izumi closed by explaining how the Cool Japan Fund has been successful in helping entertainment companies like OIMF organizers Yoshimoto find funds to build important cultural events, in place of risk-averse banks.

Moderator Yusuke Kawamura of the Daiwa Institute asked the panel about the challenges for Okinawa to grow economically. Mr. Ageda focused on the need to properly commercialize its entertainment, saying “we have traditional Ryukyu dancing that is quite different to anything from mainland Japan, so we need to make videos, movies and build contents to develop a new appeal for this. We want to commercialize these performing arts.”

Ms. Kakuchi, who is originally from Sri Lanka, the gave the foreign perspective on Okinawa’s challenges, saying; “The economic circumstances are the most challenging. We cover the [military] base issues, but Okinawa is a great tourism destination with heritage and culture which can lead to the development of the economy. When it comes to entertainment, I believe the Asian market is growing in importance, so the great environment of Okinawa needs to be protected.”

“We should not just focus on infrastructure and roads, but also the culture of Okinawa,” Ms. Kakuchi added. “Japan needs to localize its content, and though Asia is broad, when you look at India which has the largest youth population in the world, Japan needs to deliver its content locally.”

In the symposium’s second session, Japanese comedians who have been living in countries around Asia in order to promote Japanese culture abroad, shared their experiences on stage. A comedian team from Thailand “It’s been a year and NHK will be featuring us, we are working with the Thailand embassy too.”

The team from Indonesia announced that they will feature in a TV commercial for water, and said that they have been working as actors as well as comedians. One comedian from Malaysia explained that he only speaks English and Malay while working in Malaysian, helped by the fact that he has no Japanese friends in the country.

Mr. Onaha from Ryukyu Shimpo took the chance to answer the question of how local media can help promote Okinawa culture. “We can identify people, refer the readers to them and expose them,” he said.

“The strength of Okinawa is that we are comprised of a number of islands which are each locally unique. If we can communicate that in a multifaceted way, we can be successful. But we are limited by resources and tend to focus on Naha, so we need to explore all the islands, including local folklore and local arts to introduce what the people are doing here.” 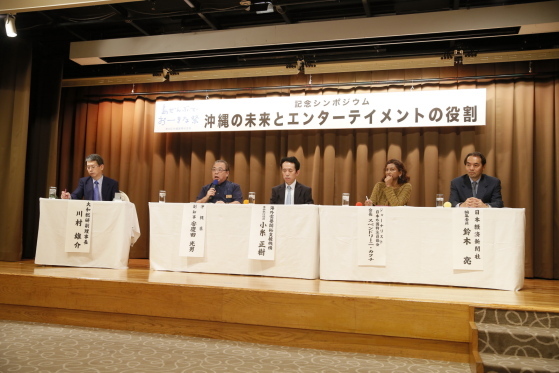