The Red Carpet and Opening Ceremony officially kicked the 8th Okinawa International Movie Festival (OIMF) on Thursday April 21st. An estimated 20,000 fans gathered on a bright and sunny afternoon to watch the parade of stars who walked the runway at Naminoue Umisora Park, a picturesque seaside area in central Naha.

The fest is now commonly known as the “All the Islands Okinawa” due to its far-reaching influence on even the distant villages of the prefecture. Thus the event has moved this year from its base in Ginowan on Okinawa Island, to the capital Naha.

The move caused a packed crowd to gather early at the coastal park, where greenery meets the ocean. The beautiful blue and green setting was highlighted further by the bright red carpet, where some 700 celebrities, directors, actors and local representatives paraded for adoring fans from 430pm in the blazing sunshine.

It is the first time for OIMF to be held in late April, and the difference showed, with the warmth apparent not just in temperature, but in the atmosphere between the waiting crowd and the line-up of guests.

There were too many stars to name them all but renowned actress Kaori Momoi was stunning in her white lace. She glided down the path with Kazuyoshi Okuyama, producer of her home-filmed movie “Hee.” Later, intense cheers were heard for NMB48 member Kei Jonishi and the cast of “What If You Can Talk With Your Belongings?”

The Opening Ceremony followed the Red Carpet at the same park, but it took place in front the giant outdoor cinema screen, set up especially for the festival.

“We hope for the further great success of the All the Islands Okinawa festival,” said Nishikawa, who encapsulated the spirit of fun of the event by then attempting a headstand in front of the assembled audience of celebrities and officials.

Deputy Governor of Okinawa, Mitsuo Ageda took the stage and said, “Thank you to the hard work of all the staff from Okinawa, Japan and around the world.”

He added, “We are happy to welcome you,” he added. “We started the festival in 2009 and then later added the title and theme ‘All the Islands Okinawa,’ creating local cheering squads. Okinawa is not only about films, but nature and traditional art. We can to send out the charm of Okinawa and I hope the festival will get even bigger and become a representative famous event to showcase Okinawa.”

Immediately after the Opening Ceremony a groundbreaking work of Japanese entertainment was presented by OIMF at the Sakurazaka theatre in Naha. The fest premiered 3 episodes of Netflix Japan’s original TV series HIBANA- Spark. This will be the first time for a Japanese TV drama to be broadcast in 190 countries around the world at the same time, showing the great strides Japanese visual entertainment has made.

And the content is remarkable. Based on a novel of the same, which won the prestigious Akutagawa Prize (Japan’s highest literary award), it broke records by selling 2.51 million copies. With the much-heralded book as an auspicious base, Netflix has created an original 10-part live-action drama series starring wildly popular actors Kento Hayashi and Kazuki Namioka, among others. It was also able to lure A-list Japanese directors like Ryuichi Hiroki, Shuichi Okita and Kazuya Shiraishi, among others, allowing the project to be superbly produced.

The audience cheered heartily the screening of episodes one through three and was thrilled by post-screening appearances by Hayashi, Namioka and Hiroki, among other special guests, who shared anecdotes of making the series. 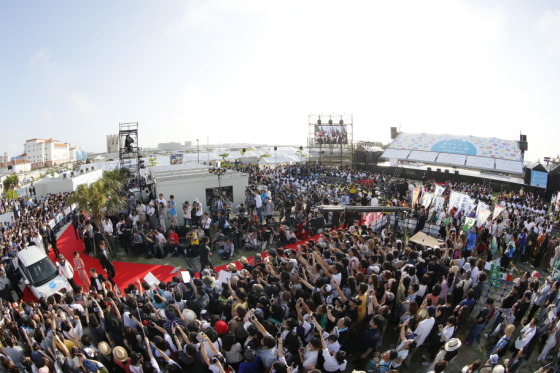