An estimated audience of 20,000 people turned out on a bright and sunny Thursday afternoon for the red carpet and opening ceremony of the 8th Okinawa International Movie Festival.

Now commonly known as the “All the Islands Okinawa” due to the festival’s far-reaching influence on even the distant villages of the prefecture, the event has seen a move this year from its base in Ginowan on Okinawa Island, to capital Naha.
The move to the biggest city in the region caused a packed audience gathered early at Naminoue Umisora Park on the coast of Naha, where the greenery meets the ocean. The beautiful blue and green setting was highlighted further by the bright red carpet, where some 700 celebrities, directors, actors and local representatives walked in the blazing sunshine from 4:30pm.

It was the first time for OIMF to be held in late April, and the difference showed, with the warmth apparent not just in temperature, but in the atmosphere between the waiting crowd and the line-up of guests.

The one hour red carpet saw a mixture of glamor and comedy, including fashion model Sumire, who stole the show and charmed the audience by spending a lengthy time signing dozens of autographs as many other guests took their turn to walk through. She was joined by producer Yoko Narahashi and actress Nanami, for Special Invitation movie “Hold My Hand.”
Renowned actress Kaori Momoi, dressed elegantly in white, glided through with Kazuyoshi Okuyama, producer of her home-filmed movie “Hee.” Later, further cheers were heard for NMB48 member Kei Jonishi and the cast of “What If You Can Talk With Your Belongings?”

OIMF already has a history of promoting works from around the Asian region, and OIMF8 is no exception. From Taiwan, the director of “Rookie Chef,” Fung Kai wore dark shades as he waved to the crowd, accompanied by the glamorous Lorene Ren who wore a flowing dress with a gold belt. Korean directors Han Sang-Hee (“Trumpet of the Cliff”) and Ha Jung-Woo (“Chronicle of a Blood Merchant”) also appeared while a crowd of international media looked on.

The red carpet ended with Yoshimoto President Hiroshi Osaki accompanied with comedian’s Kiyoshi Nishikawa and Tamako Miyagawa in colorful Okinawa dress waving to the crowd, before the Opening Ceremony began. 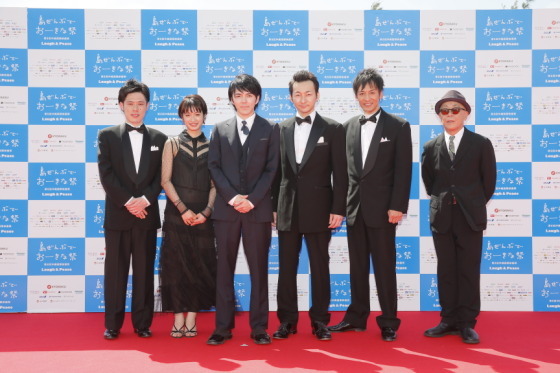