Comedian Naomi Watanabe won the nomination to be the “ANA Okinawa Poster Girl” for the 8th Okinawa International Movie Festival at a press conference on Thursday 24th March, held on the 5th floor of Haneda Airport Domestic Terminal b in Tokyo. Titled “All the Islands Okinawa” the festival selected Watanabe amongst Yoshimoto’s roster of female comedians.

The program is organized with the support of All Nippon Airways (ANA) for the 8th OIMF festival due to begin on Thursday 21st April. Before the selection, an “ANA x Yoshimoto Poster Girl” prediction event was held with the motto “Let’s Cheer for Okinawa” with the participation of 10 female comedians from Yoshimoto Kogyo.

The Emcee of the press conference was comedian duo Non Style. Ishida of Non Style appeared on the stage wearing a pilot uniform, with Inoue as co-pilot. Inoue was excited to wear the real uniform and commented “it’s a very rare opportunity to wear this!” He was proud to mention he is just one rank below Diamond Class as an ANA member.

Then the finalists, Naomi Watanabe, Okazu Club and Natsuko Yokosawa came up to the stage. Watanabe emphasized that she has traveled abroad a lot.

Finally Watanabe who got the most votes in the previous prediction event, and won the position of the poster girl! She received a sash from a cabin attendant and showed her deep appreciation for the announcement that she will get return tickets in business class for an international flight, as an extra prize. She wants to go New York and said “when I visited there the last time, I used business class by using my miles of ANA. ANA’s business class is actually fantastic. The seat can be completely flat and becomes a bed! It’s very comfortable and the food is good too. They even serveed ramen noodles of the famous shop Ippudo.”

She also got an ANA original carrier pack and became excitedly said “I really wanted this! The upper part of the pack can be opened! I am so happy!” Inoue added, “I wanted to have this too. But it’s sold out now.”

The other 3 finalists also received direct tickets to Miyako Island. Inoue said, “I am jealous. I have been there and really enjoyed the beautiful view of the sun going down. It was so touching.”

Watanabe will appear in a campaign movie as the ANA Okinawa Poster Girl from 1st April. She will also take part in the red carpet of OIMF, a tea party with the prizewinner of the prediction event and many more activities. “I’d like to share ANA’s great points! I will do my best!” she added. 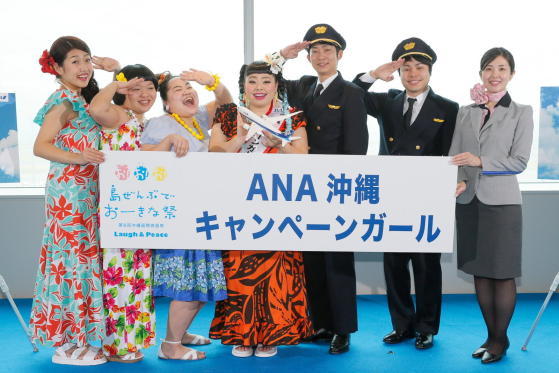