Event Report2016.04.21Takuro Tatsumi on Shooting “Trumpet of the Cliff” on Ishigaki Island

On Friday 21st April, Japan-Korea co-production “Trumpet of the Cliff” had a screening and cast greeting at Sakurazaka Theatre Hall B in Naha City.

The beautiful but heartbreaking love story takes place in picturesque nature on Ishigaki Island. Taking the stage after the screening were Takuro Tatsumi who plays the uncle of main character, Yuuki Kubota who plays the ex-boyfriend of the main actress, Niko Onaga who passed the audition for a child and Director Sang-Hee Han.

The emcee asked Kubota about his impressions of Ishigaki island, and Kubota explained that it was his first time to visit, but he enjoyed a warm atmosphere of both the nature and the people. He was even impressed how beautiful the cows were!

Tatsumi shared his experience of the set being hit by typhoon no. 15 during the shooting. He said that he had a very nice time with a BBQ shared with everybody, even though the fierceness of strong wings hit 70 meters per second.

Director Han showed his appreciation for the support of the residents of the island, and his happiness that he could film famous spots, such as Uganzaki. He also said, “I am very glad that Tatsumi acted as perfectly I expected. I knew Kubota personally and I wanted to work with him so I invited him to join the film.”

In the end, the director said “I’d like to shoot again here if I have opportunity. This is the first screening for the film even for us to see it. Please enjoy it.” 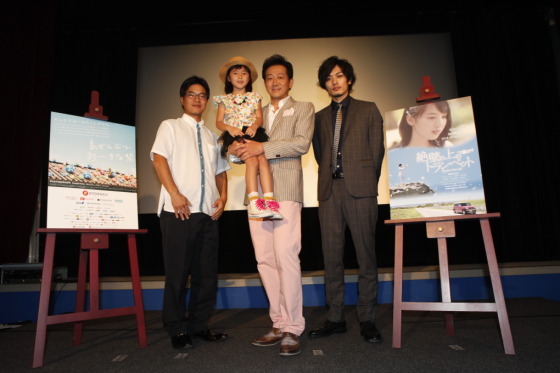