It may have been the first time that the Okinawa International Movie Festival has been held at Naminoue Umisora Park in Naha, but despite being the 8th edition of the event, the venue already feels like home.

The Closing Ceremony on Sunday April 24 saw politicians from around Okinawa, as well as Tokyo, take to the stage to celebrate the success of the festival – almost all smiling and commenting on the wonderful weather this year, thanks to the new April dates. With the Creator’s Factory Awards given out at the end of the ceremony to new scriptwriters and directors, there was also a sense of the future at the ceremony. OIMF 9 was also confirmed.

One of many guests to acknowledge the fine weather, a result of the festival being moved from the end of March to just before Golden Week, Masaharu Noguni, Mayor of Chatan, said “showing many movies from around the world help us to exchange our entertainment. I want Okinawa to send out the message of peace.”

Aiko Shimajiri, Minister of State for Special Missions, visiting from Tokyo had joined a Symposium on Saturday to discuss the future of Okinawan Tourism. At the Closing Ceremony she said; “I’m looking forward for this festival to continue with our government support. Yoshimoto will create a school for the entertainment business, which is important, but that too needs a lot of support.”

Politician Natsumi Higa followed, joking that it feels like the fest couldn’t be over yet. “Even though this is the Closing Ceremony and I feel like the festival is continuing on! I appreciate the participation and supporters. Please remember this warm wind and come back for the next one!” she said.

Fellow politician Shuhei Kishimoto added; “Before I was a politician I created media contents in the government and took care of the Tokyo Film Festival. Mr. Osaki said this festival will continue for 100 years, so we have more than 90 to go!”

Veteran film director Sadao Nakajima, who helms the Kyoto International Film Festival (KIFF) talked about his impression of OIMF. “This festival has a lot of power from the citizens. Kyoto has a long history but Okinawa’s supportive power is even more strong, with the passion of fans. Kyoto is also supported by Yoshimoto so we feel we are like brothers or sisters. Kyoto I call the home of movies but Okinawa is the place for new things.”

Ichiya Nakamura, Keio Uni Professor, and committee member of KIFF, added “this event is very unique, everyone creates this festival together. Kyoto has a third edition so we are the younger brother, but we have many traditions so please support Kyoto Film Festival, and congratulations on OIMF!”

Shigenobu Asato, Vice President of the Organization Committee welcomed the leaders of Cheering Squad support groups from various regions of Okinawa. “We are here to announce the success of the festival. We are not just creating memories but looking forward to the future. What is our future? With a spirit of Laugh and Peace, let’s start!” he said.

Hiroshi Osaki, Chairman and CEO of Yoshimoto Kogyo and President of the Okinawa Film Festival closed with the final speech.

Mr. Osaki then encouraged the volunteers to come to the stage as the crowd applauded their support. 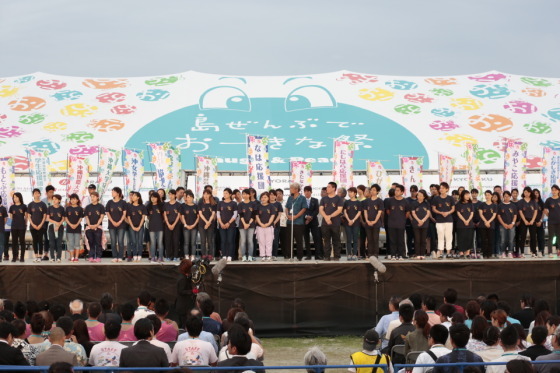