The 8th Okinawa International Movie Festival ended with a musical extravaganza at the main stage in Naminoue Umisora Park in Naha, called the “All Ending.” Emceed by comedian duo Garage Sale and Slim Club, the Sunday evening event kicked off with local pop group Kariyushi 58.

Known for blending traditional Okinawan folk music with rock, the group led a special collaboration called “The All the Islands Okinawa Band,” with musicians joining on stage from various groups.

Two songs in, the first rain of the festival suddenly began falling causing a temporary halt to proceedings – fitting then that next on stage was Jimama, who performed “Daijyobu” (“It’s going to be alright”).

After a further stoppage for ten minutes, all acts took to the stage for a highly emotional rendition of festival theme song “Egao no Manma.” Despite the rain, the audience remained to see the show, and the musicians, touched by their dedication, responded with a rousing rendition of the song.

The All Ending event concluded with a yearly message from comedian Sanma Akashiya by video, followed by a spectacular display of fireworks over the bay, concluding another packed Okinawa International Movie Festival. 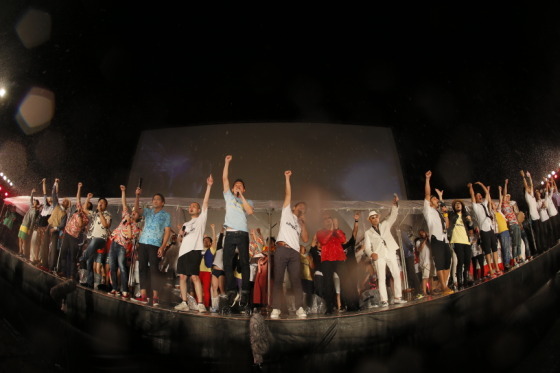