The 8th Okinawa International Movie Festival completed its third day presenting both blockbuster and art house films as well as a key symposium and a legion of special guests. It hosted the Japan premiere of the world box-office leading Zootopia, which has earned around $700 million to date for Disney Studios. Top Japanese actress Kaori Momoi screened Hee, a challenging portrait of a struggling woman, which she also directed. Industry powerhouse Yoko Narahashi, director, producer and casting director, showed her directorial effort Hold My Hand. The fest organized an insightful symposium titled The Future of Okinawa and the Role of Entertainment. It brought together an impressive cadre of industry experts to discuss the topic.

Zootopia screened to a packed house at Cinema Q in Naha. The animation fantasy creates a town predators and prey live together in harmony, and uses a host of incredibly cute animated ‘animals. Bunny Hops becomes the community’s first rabbit police officer and is paired with a fox named Nick Wilde. The natural enemies work together to solve mysteries in this charming not-only-for-kids children’s movie.

Hold My Hand unspooled at the Mihama 7plex in Chatan. It’s an uplifting tale of Makoto (Jay Kabira), a man with a slight learning disability. In his school days he was bullied and humiliated by cruel classmates. He marries Sakura (Nanami), with a similar disability but is driven to crime to try and make her happy. Years later he meets runs into Reiko (Sumire) and their trip across Japan makes him realize crucial truths. The pic is Yoko Narahashi’s third directorial feature and was written by playwright and actor Masayuki Imai. Imai died age 54 after the film casting had already begun. Yoko Narahashi expressed her hope that the audience will come away touched by the sentiment of the movie, “being happy with what [they] have, of life itself, of trying to live life fully, as Masayuki did.”

The highly anticipated Hee hit the screens at Cinema Palette in Naha, capturing audiences with its arresting filmmaking and tour-de-force performance by Kaori Momoi. The film is mainly Momoi’s character talking directly to the camera about how she ended up as an aging prostitute with a wrecked life. Momoi discussed her performance in the work shot in her own home in LA, explaining that playing the lead “wasn’t that difficult.” “It was like a singer-songwriter work. I was director and actress at the same time so I understand what the actress wants to do. How can I exceed the director's imagination [when I am also the director?]” She noted, “So, I didn’t do any rehearsal and I don’t practice.” She stressed, “I don’t do retakes, so it was like documentary filmmaking,” giving insight in to her working style. “When the script came to my hands I didn’t use it at all, I rewrote it a lot and on the set, every day after the shooting I restart re-writing the script.”

Political and media leaders and commentators joined forces and shared ideas at a Special “The Future of Okinawa and the Role of Entertainment” symposium, held at ANA Crowne Plaza Harborview in Naha, Okinawa.

Organized in conjunction with the 8th Okinawa International Movie Festival, it began with a greeting from Aiko Shimajiri, Minister of State for Special Missions. Ms. Shimajiri expressed her hope that Okinawa’s nature, island culture, unique cuisine and traditions of arts, including eisa dancing, will be promoted within the Cool Japan initiative. “I wish that the power from the Okinawa Movie Festival will be transmitted throughout Japan,” she said. Other leading figures in the field spoke, including Hiroto Izumi, Special Advisor to the Prime Minister of Japan. 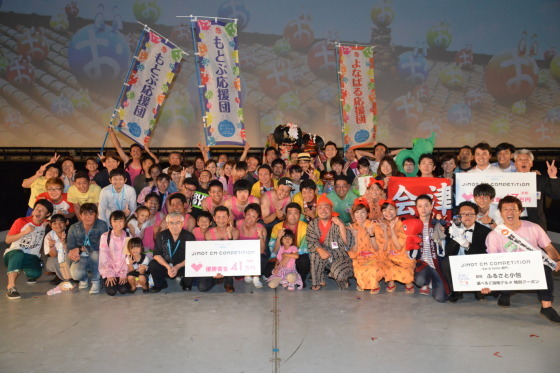