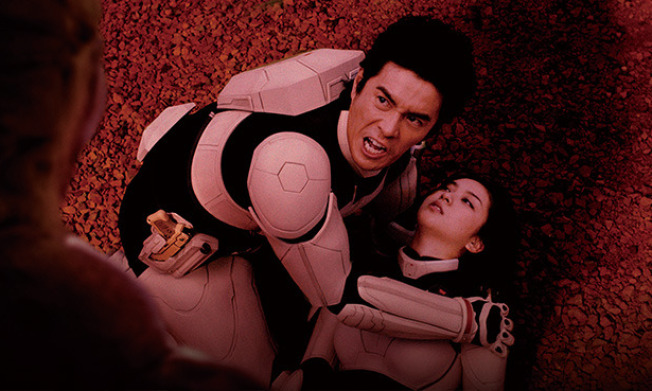 Don't blink! Marvelous action which turns the history of cinema on its head!
Japan's best performers VS their greatest ever enemy, "Terraformers".
Don't miss a second of the 109 minute powerhouse battle royal!

It's the 21st Century, and as a solution to Earth's over-population, humankind has chosen to colonize Mars. As part of the project, humans had sent mosses and "certain life forms" in an attempt to terraform Mars. 500 years have now passed. For the project's final stage, 15 crew members have been sent on a mission to exterminate the "certain life forms". The straightforward mission turns deadly as the crew is attacked one by one by the "certain life forms" that have mutated into violent "Terraformars".
However, unbeknownst to the team members, their bodies had undergone groundbreaking surgery. They had been mutated with the DNA of insects, giving them superhuman powers. Will the human race survive? What is the conspiracy hiding behind their battle with the Terraformers...?